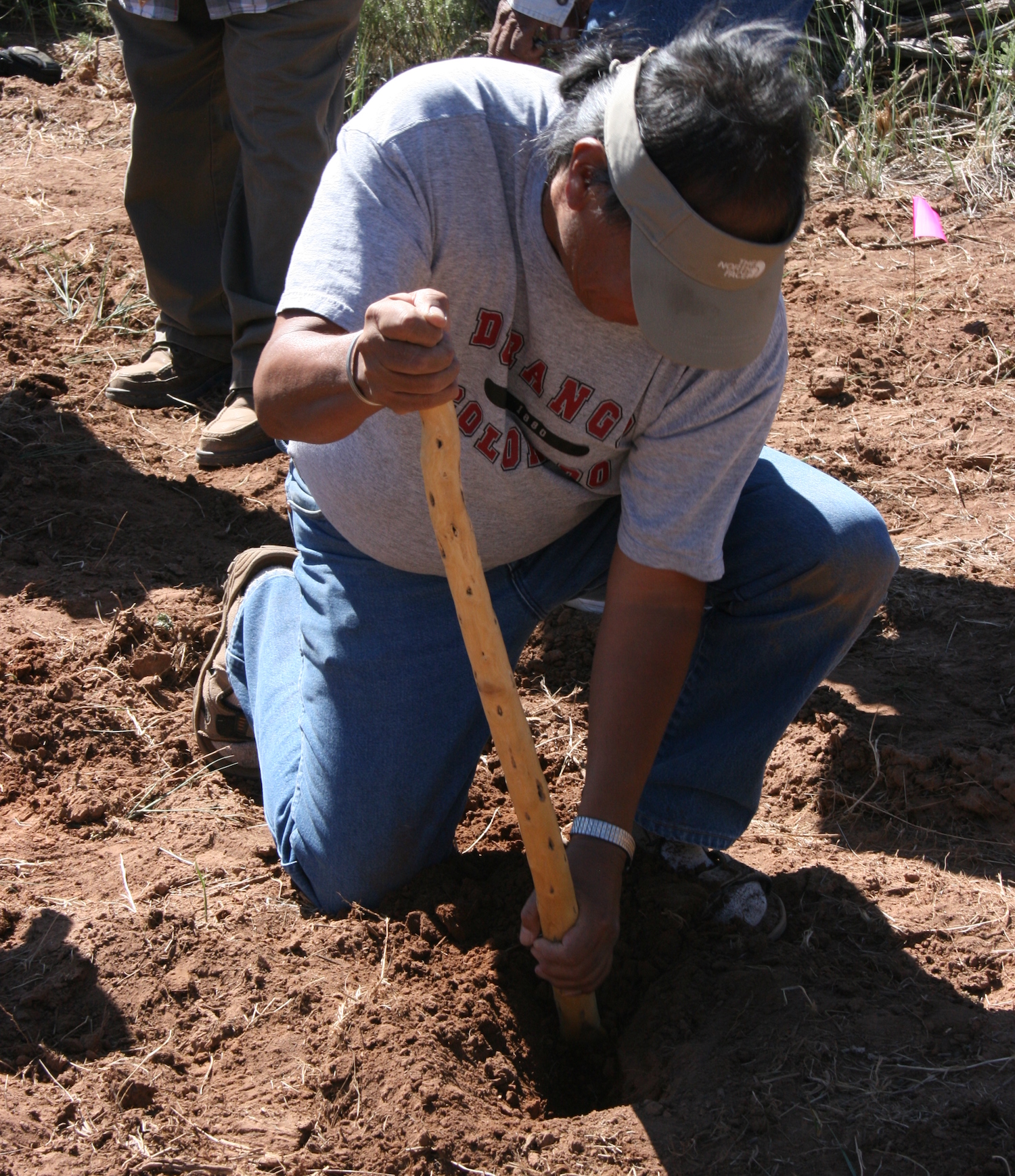 The primary tool for planting is a planting stick or, in the Hopi language, a so’ya. Traditionally a so’ya is made from greasewood (Sarcobatus vermicalatus), but some planting sticks today are made from a length of metal pipe with a narrow blade welded to one end.

Planting begins by using your foot to scrape away the upper layer of loose, dry dirt. This exposes the top of the underlying hard-packed soil. About a square foot area is cleared. The planter gets down on one knee and grabs the so’ya with one hand low and one hand higher up on the tool. A narrow hole is dug using a pulling motion toward the planter. Typically, the hole is dug to a depth of about 8 to 10 inches or to the depth where good soil moisture is encountered. The hole is dug deeper if the soil is drier and shallower if the soil is moist. This soil moisture is critical for plant germination and for the plant to be able to grow until there is more precipitation, which might not occur until many weeks after planting.

Hopi farmers plant corn in clumps. 10–20 seeds are deposited into the hole. The excavated earth is put back gently into the hole in the order it was removed with the moist soil covering the seeds on the bottom and the drier soil on top. The loose dry dirt is on the top, but a small basin is created on the surface to collect any precipitation that falls and to create a dust mulch that reduces evaporation.

The farmer stands and takes two or three steps to measure where the next clump of corn will be planted. Because the soils in the PFP gardens hold a bit more moisture than those soils near the Hopi mesas, the PFP clumps are typically spaced about 1.5–1.75 meters apart rather than the three-meter spacing typically used at Hopi. The wide spacing of the planted clumps reduces competition for valuable sub-surface moisture.

Flick through these slides to see how planting is done the Hopi way! The descriptions are based on Notes On Hopi Economic Life by Earnest Beaglehole, 1937. 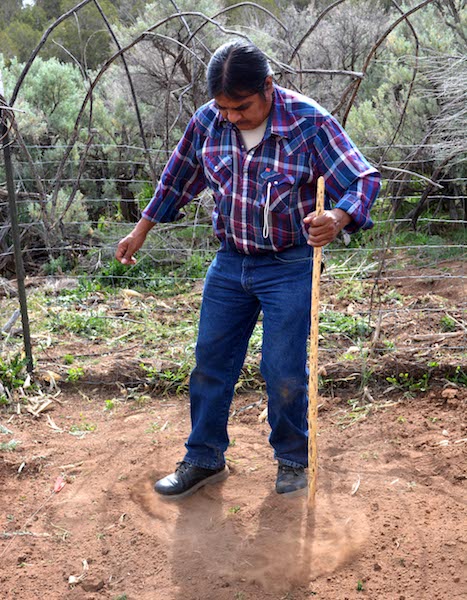 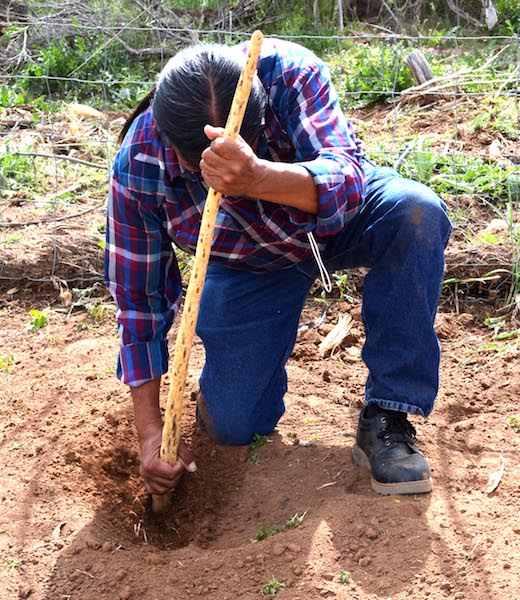 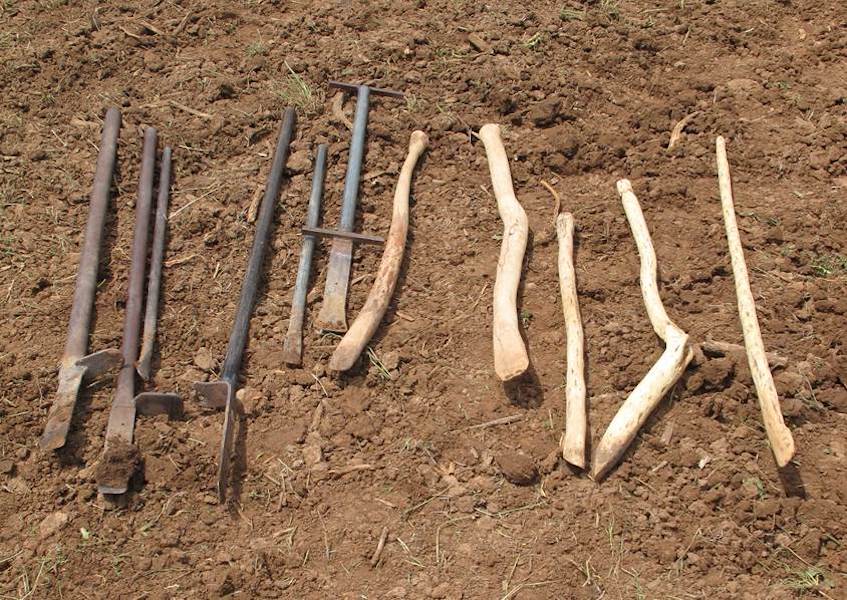 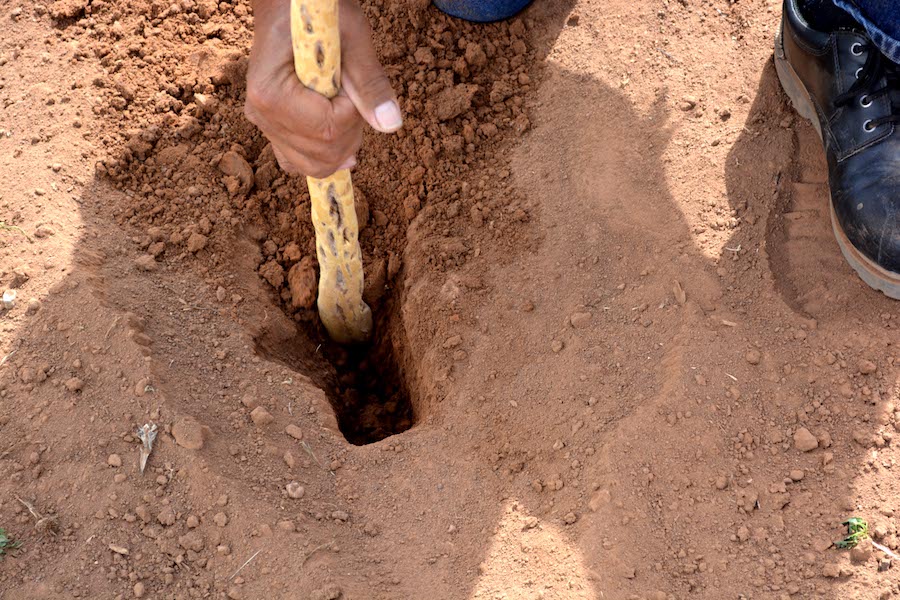 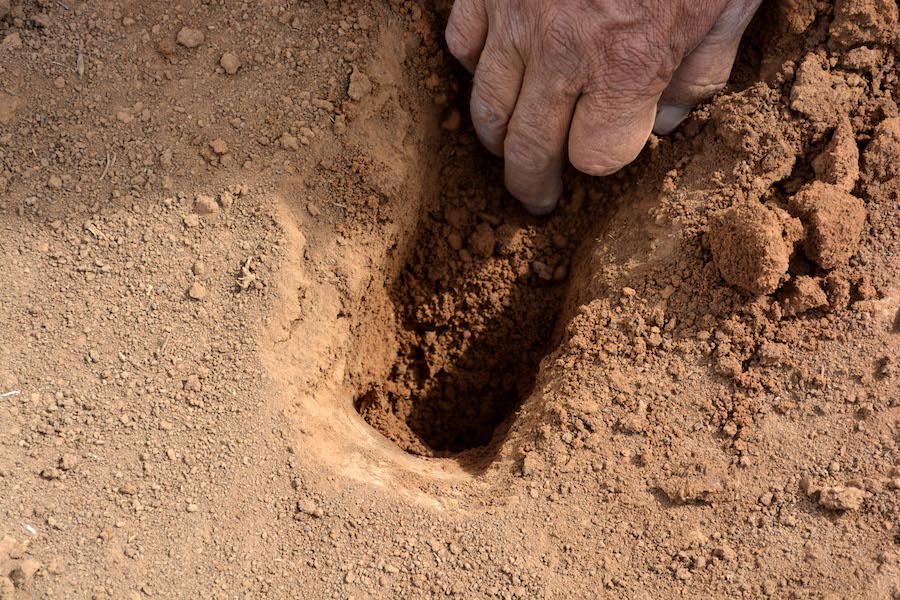 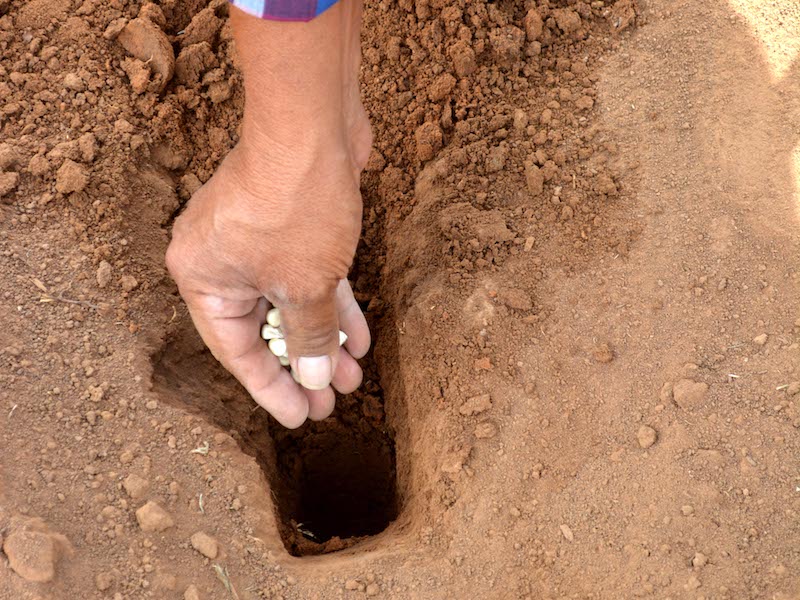 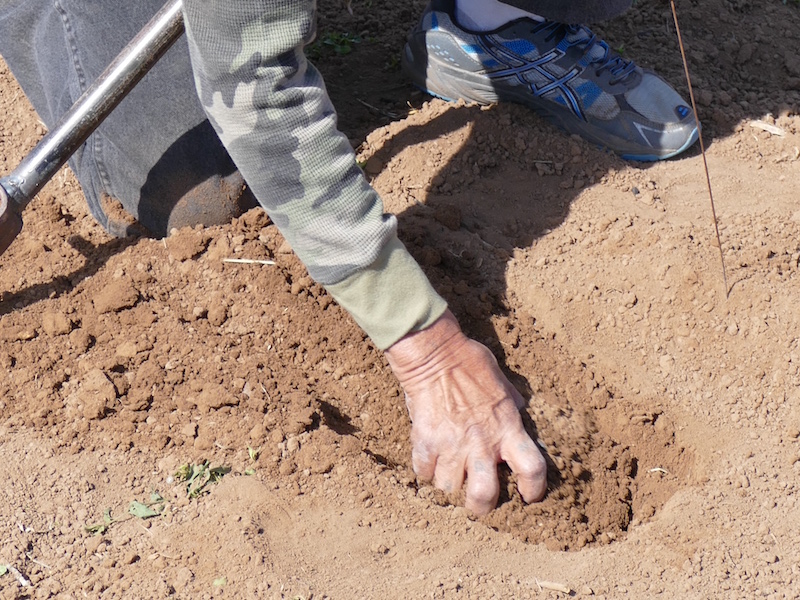 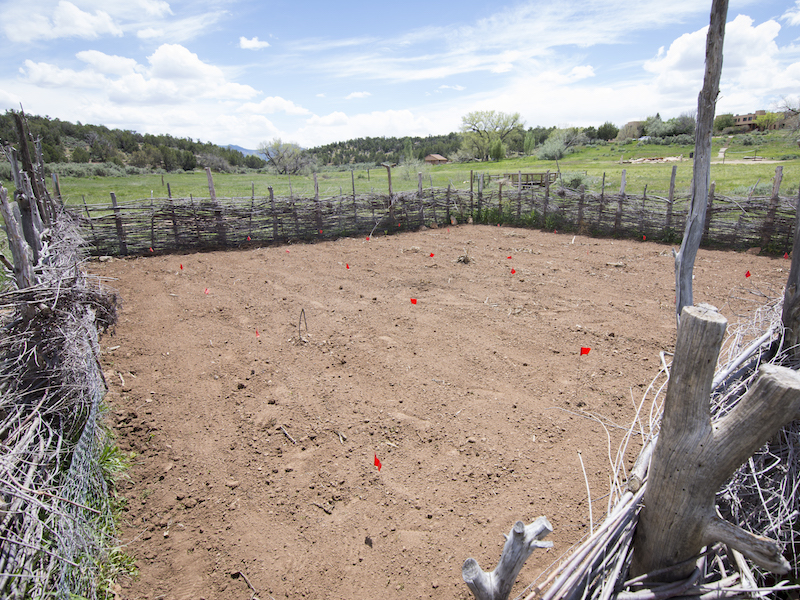 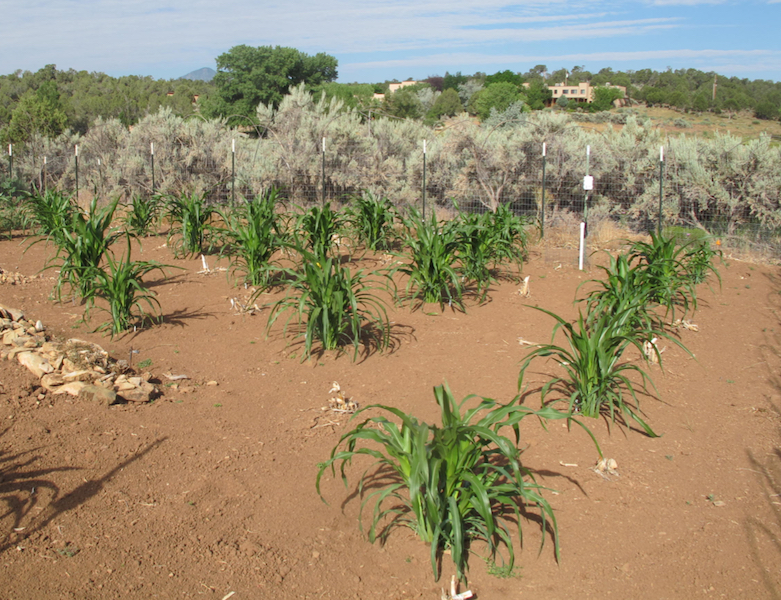 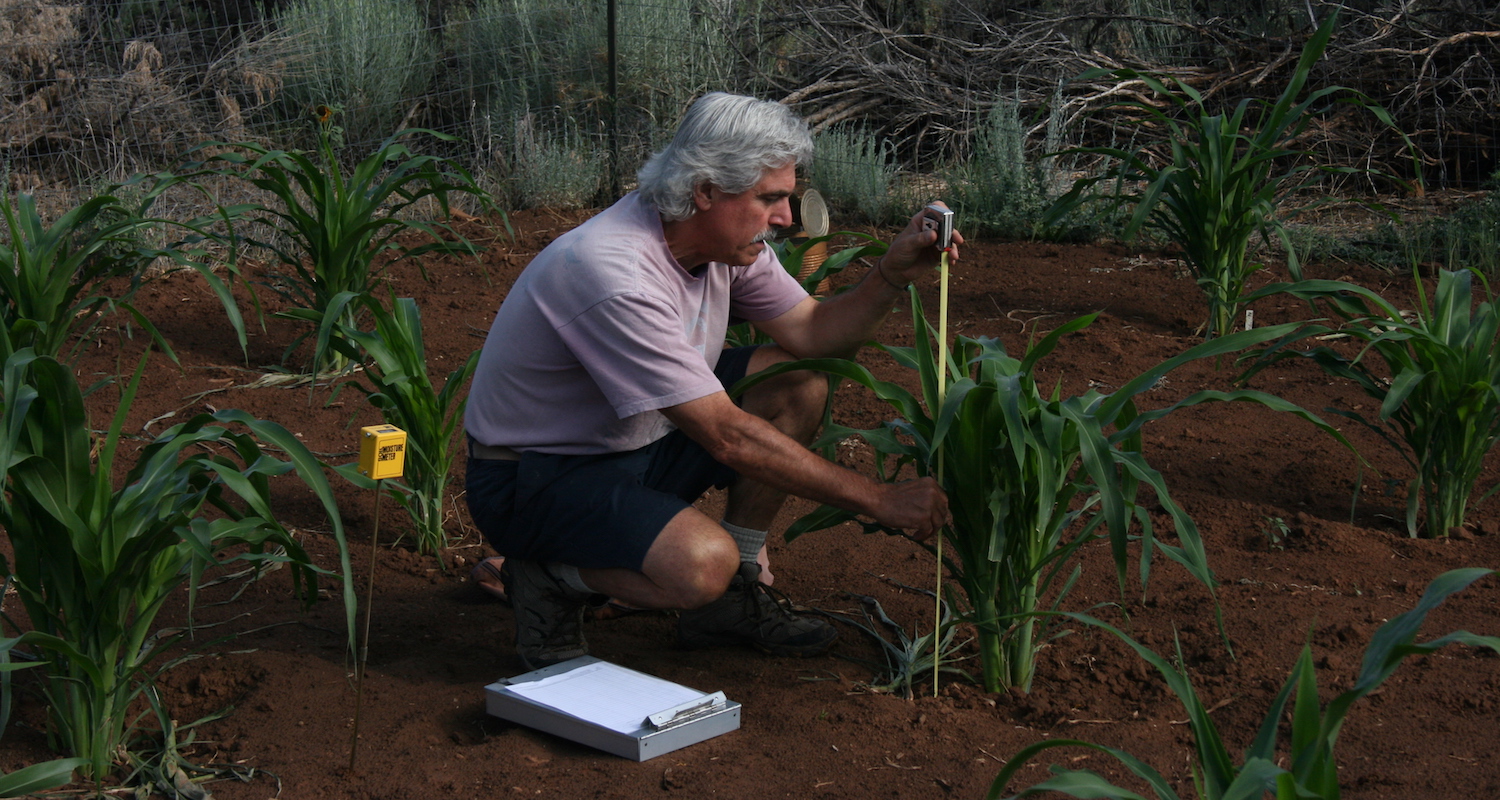 Paul Ermigiotti records the growth of maize in the Check Dam Garden.

The procedures for monitoring Pueblo Farming Project gardens were based on those developed by Benjamin Bellorado in an experimental gardening study that he developed for the Animas-LaPlata archaeological project and for his MA thesis at Northern Arizona University. For the majority of the Pueblo Farming Project these procedures were implemented by Paul Ermigiotti and staff and volunteers who assisted him.

Monitoring was conducted each week. The primary objectives were to record growth stages, to document damage by pests, and to make other observations about the condition of the gardens. The data were recorded on paper forms in the field and later put into a database.

The data collected each week on growth stages includes the following: 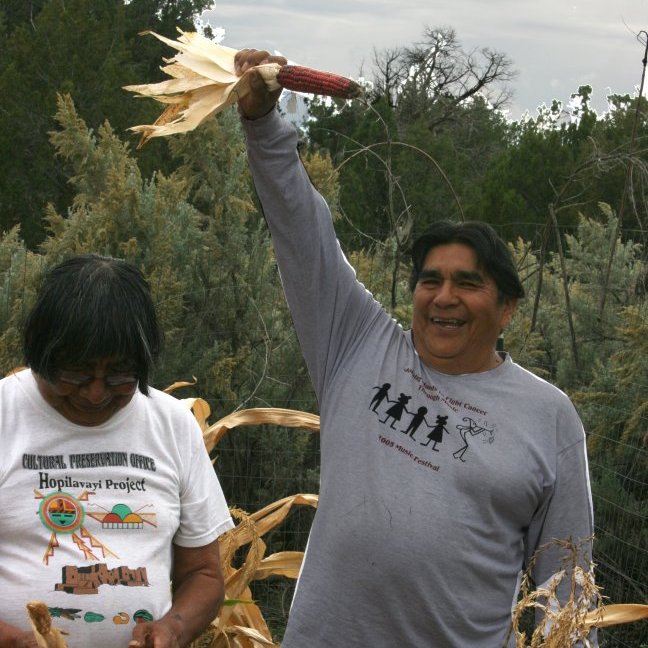 The harvest and yield data entry for the Pueblo Farming Project is a three-step process that includes collecting the corn from the field, weighing the ears just after harvest, and, when they have dried completely, weighing the ears again to record the dry-kernel weight for each ear.

On harvest day, typically in mid-October after the ears have sufficiently ripened on the stalk, the farmers approach the garden with anticipation. All of the ears from each stalk in a clump are shucked, the silk is removed, and the ears are recorded and tagged according to the clump, stalk, and ear. After the ears are collected from a clump the stalks are bent over at the base and laid to rest on the ground. This laying to rest of the stalks is part of the life process that cycles through birth, maturation, and death. The stalks left in the garden also help with the spacing in the next year’s planting. Planting between the stalks ensures that seeds are not planted in the same place two years in a row. 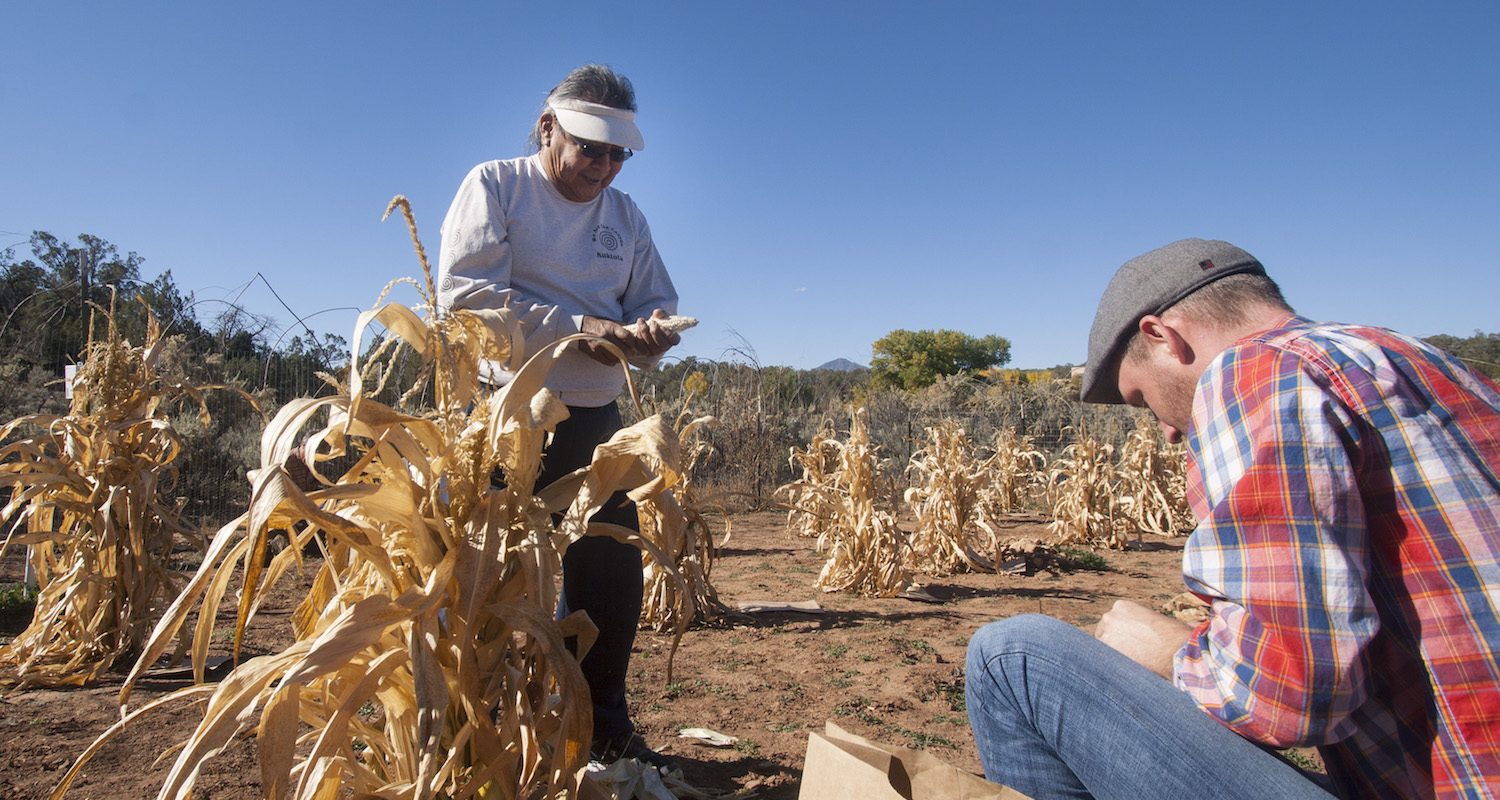 Harvesting maize and recording its attributes.

After harvest the ears are weighed to obtain a wet weight, because there is still considerable moisture remaining in the ears. The ears are then placed on trays and allowed to dry for two months.

When the ears have thoroughly dried, each ear is weighed with the kernels intact and after the kernels have been removed. Ear, cob, and kernel weights are entered into the data base. Additional information on the ear is also recorded such as the number of rows of kernels, kernel color, and the completeness of kernel filling on the ear. The categories describing the condition of the ear include: